At the end of last year both sludge based bands from Athens, Greece, Sadhus “The Smoking Community” and Last Rizla released their new albums via Fuzz Ink. Records and I will talk about each one separately, because, even if they are kindred bands with common members and the genre addressed is the same, however the two bands sound distinctive. 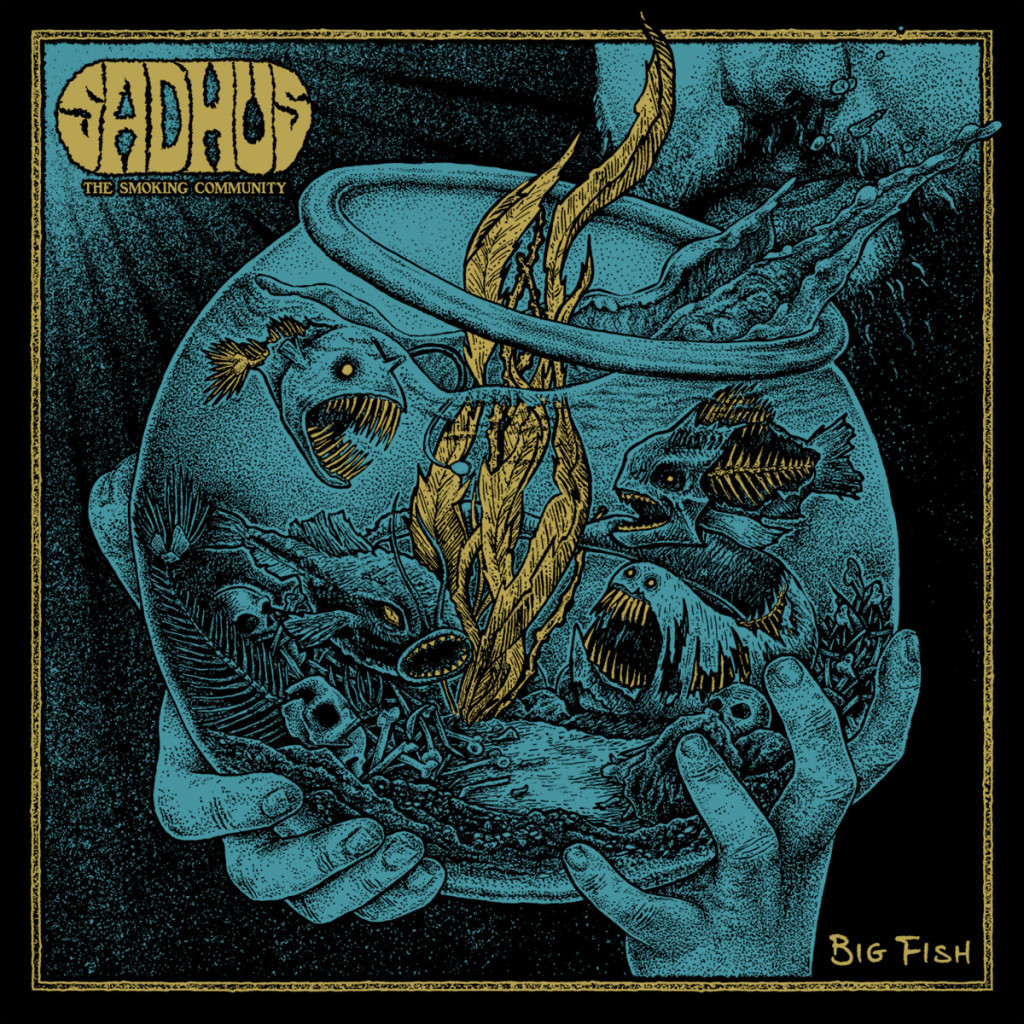 About this band I knew little till Stavros, both the vocal of S.T.S.C. & Last Rizla told me last summer and also, in his majestic kindness, offered me a CD gift with their first album released in 2014 for listen it and I did that later at the beginning of autumn…and that was the moment when I realized how crazy and how criminal their music are…with tons of heavy riffs and a voice made of steel and a sound so muddy that became infectious to me since the first listening!

Then I found that they exist till 2011 and also they are “a smoking community” of crazy smart guys gathering under the Fuzz Ink. Records. somewhere through the 13th floor of a flat from Piraeus neighborhood in Athens.

Prior releasing the new album, the band released a 4-way-split album, called “Jazz on Bones”, together with their fellows Last Rizla, Friend of Gods & Rita Moss, each band participated with one song on this interesting collaboration.

So, the 2nd struggle from Stavros –vocals, Thomas G. – guitars, Nikos (Mak) – bass and Greg – drums, called “Big Fish”, consisting on 6 tracks full of heaviness and nervous breakdowns, was recorded on Wreck-It Sound Studios in Corinth, home of one of the greatest greek band ever – 1000mods and provided us a sample of modern sludge made in Greece.

Listen to this new album is like being a small fish in a narrow space with dense growth, tryin’ to find some air, but also tryin’ to survive each minute, coz’ the big fish lurking and looking after you to rip you apart and eat you alive. It’s so angry and so dim. This album is like a deadly toxic swamp, once entered you’ll never escape from the fury and the destruction of these four hungry souls, ready to devour your ears and your brain. The artwork made by Black Space is also badass shit!

The first song, called “Hyper Roller” is the start of madness! So destructive, so fast and with a tone of catchy riffs made by Thomas, all completed by the voice of Stavros, this crazy bastard, one of the best vocalist from Greece! Is like being in a rollercoaster!

The next effort, “Flesh”, is so vicious, with a more doomy approach in the pace of fucking holy Black Sabbath, and Stavros I believe wants to rip your flesh from your bones and to consume your soul little by little. He is in the same time a soul vampire and a lycan for every listener, and this song is a greek standard of what means sludge from the Mediterranean area. 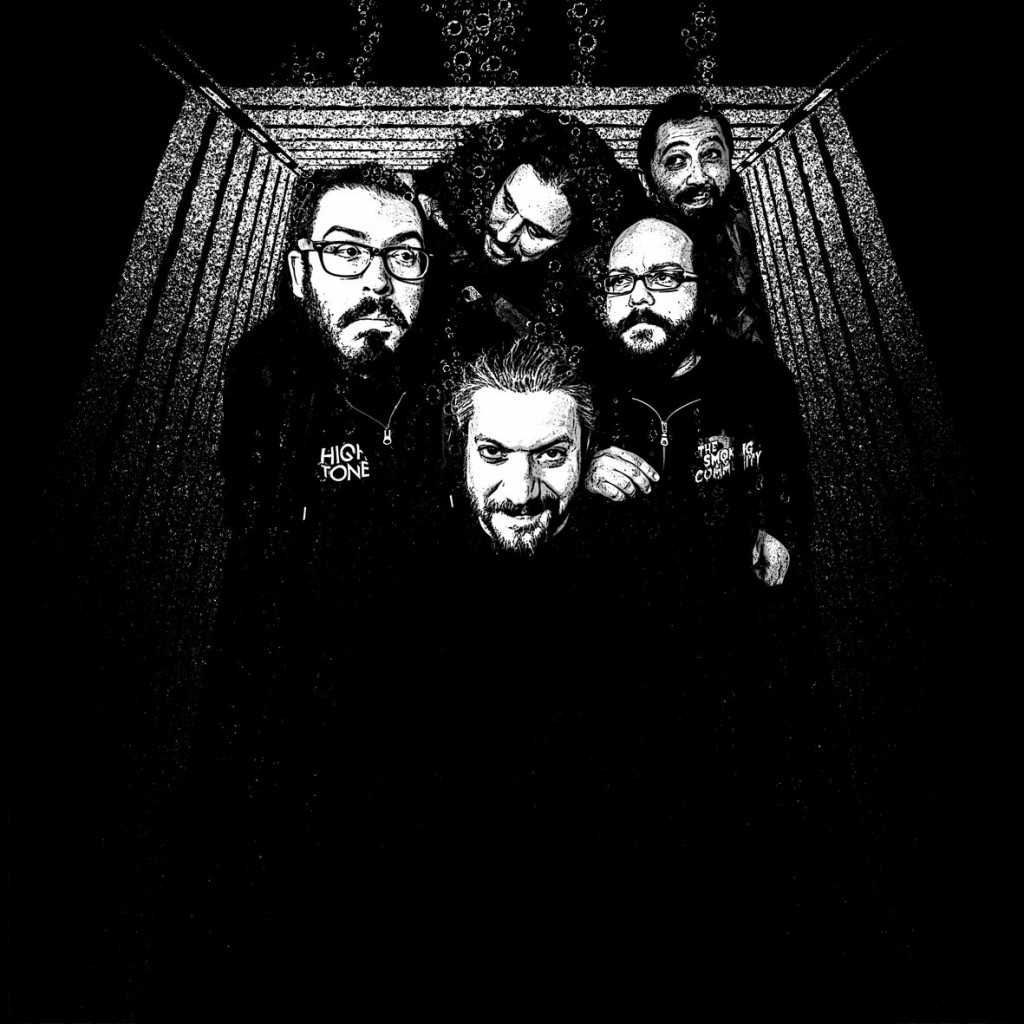 It follows “Lazarus”, the longest track on this album, over 8 minutes of real pure sludge, entered in your veins and then in your heart and command you to raise up like Lazarus in front of this guys, being like 4 Sludge Necromancers, ready to roll you as they wish! The end of the song is simply agonizing.

The title track, “Big Fish”, comes and complete the task of this guys to destroy every single part of you! Everyone must to know that the big fish was launched at water, from the Mediterranean Sea to worldwide, ready to infect with thousand of sludge riffs every opponent and to rip every single head apart with his big sharp teeth. THIS IS SADHUS “THE SMOKING COMMUNITY” SPIRIT!!!

Next one, called “Sobbing Children”, is in the same mood of the first song, faster and more driven to be right in your face, with a hint of hardcore punk, but also with a marvelous middle stoner passage in the style of Planet of Zeus or 1000mods. The final is probably the most catchy part of the entire album!

The last song of this fantastic album, I.P.S. (intelligent psycho sludge), and what a title track, right?  comes with another 7 minutes of bursting demonic vocal parts and evil horror guitars that resurrect all the deads from their graves and conquer the world by eating the flesh and the brains of the living ones. All of these aspects make this song to be my favorite one from the album! A splendid piece of fine poetic sludge metal.

I will give it a big 9/10 to this craziness album. 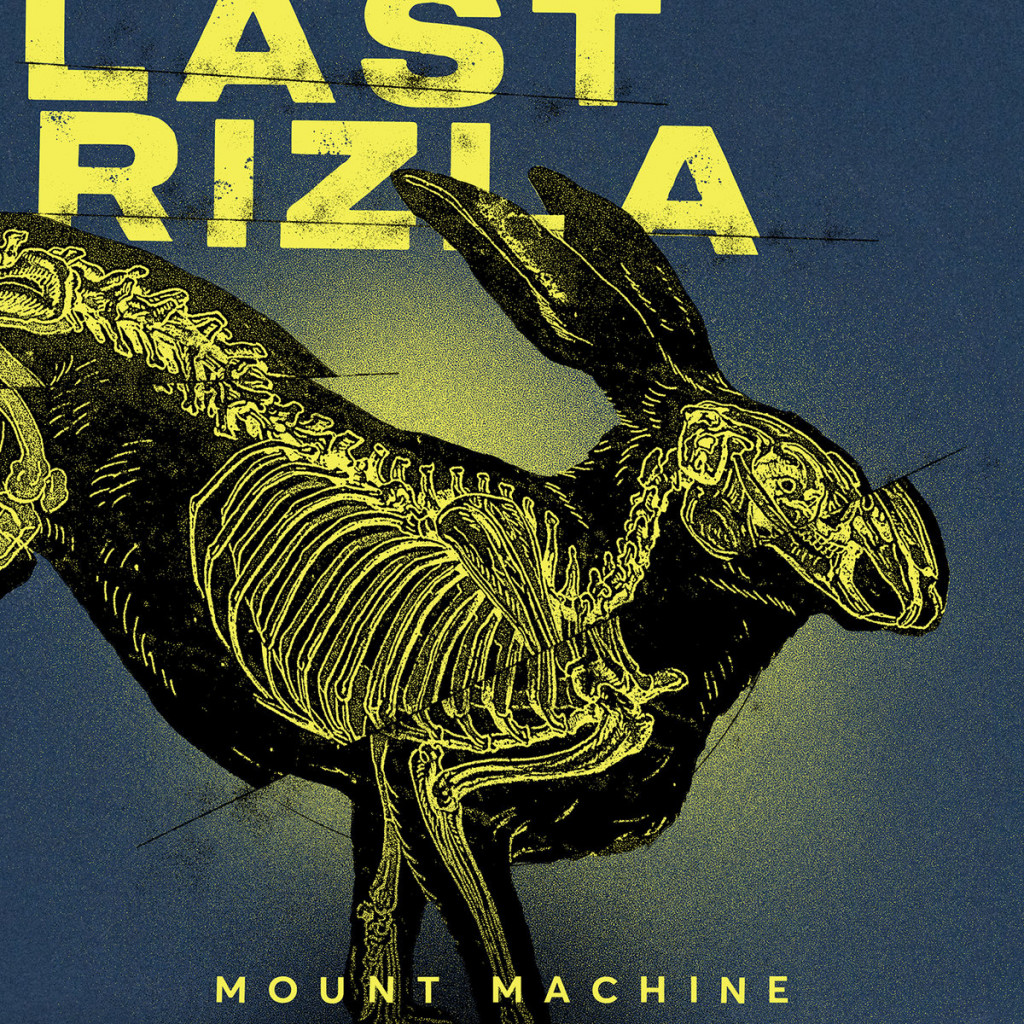 I found Last Rizla in the summer of 2017 when they came into Romania for the first time. Even if they played in Bucharest in front of probably 15 persons in the now defunct club Hybrid, compared with almost 80 persons at Cluj, they impressed me so much and I made with these wonderful guys a video reportage, a real funny one, and also we remained good friends, so, for their second coming in Bucharest, in the summer of 2018, they announced me in advance about their intentions to releasing the new album towards the end of the last year.

About the past of Last Rizla, I discovered that they formed somewhere in 2009, but in the actual formula, with Stavros on vocal duties, with Greg taking the drums (they both also sing in Sadhus “The Smoking Community), together with Choko on guitars and Kostis on bass are in this madness from 2014. Stavros also told me that “Last Rizla is a party band, so, we play first for our pleasure, and then, for you”.

That’s why the last album “Mount Machine” consists only from 3 songs, but are master sludge ones and it’s no exception comparing to older albums, created in the same note of length and composing. About the title name, I made some researches and I found that it’s a Japanese Mountain in the northern Isle of Hokkaido, and into the Ainu language (the language spoken by members of the Ainu ethnic group on the northern Japanese island of Hokkaido) means “Female Mountain” or „female land”, and in fact this is so funny, because all the 3 songs on this album are pretty far away to be gentle and kind as a female…or maybe a female is also badass and strong…so, can be a contradictory quote or a title with double entendre.

With a month earlier to launched this album, the guys released a song named “Oporto”, which appeared on “Jazz on Bones” 4-way-split album and this was like a good excerpt of how will going to be on “Mount Machine”. The album was also recorded at Wreck-It Sound Studios in Corinth like in the case of S.T.S.C. and the artwork was made by the band itself.

The first song on this short album (of 21 minutes in length) “Dive”, starts with some groovy guitars and with the hysterical voice of Stavros like a mad prophet screaming at us. Then, suddenly, the song develop into a psychedelic masterpiece, like in the note of Oranssi Pazuzu style. This is a pure example of a band with a lot of “rizla”, used to create great music! The song ends with the same sequence as it starts. This is my favorite song from this delirium tremens album! 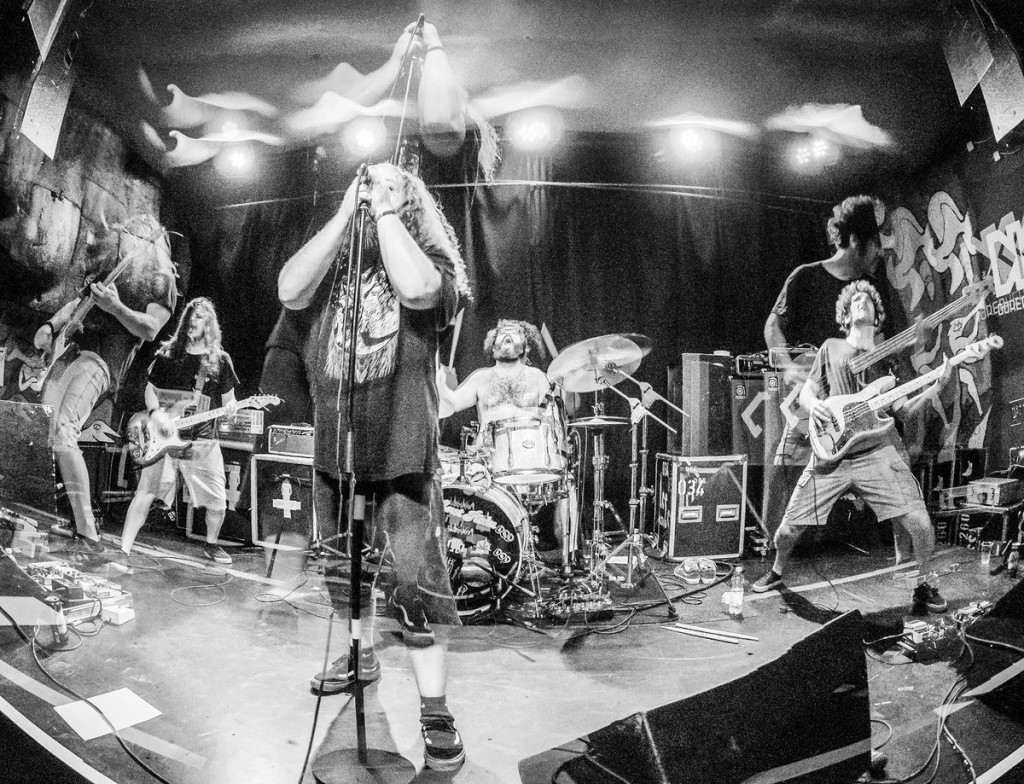 The next one, “Battles: Rambo” continues the same theme like its predecessor “Battles: Sinatra” from 2011 and I believe it’s a homage paid to their assistant engineer Ramon, nicknamed “Rambo”. Stilistically speaking, the song embarks into a psychedelic-sludge journey, sprinkled with some hardcore punk, and this whole mechanism is anointed with the powerful voice of Stavros. Great job dudes!

The last song, called “Xalivas”, deliver us the necessary evil that we looking for in ourselves and the rhythm is draconian! I simply love this band and I’m so glad that I discovered such nice and smart guys, full of creativeness and funny jokes.

The whole album can be found on the band’s bandcamp page, so, go for it and enjoy their damage music!